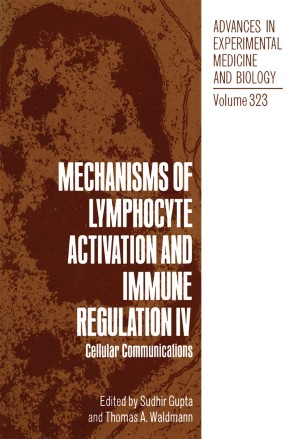 Part of the Advances in Experimental Medicine and Biology book series (AEMB, volume 323)

In recent years rapid progress has been made in the areas of T cell and B cell biology, cell-cell and cell-matrix/stroma interactions. The use of isolated subunits of the T cell receptor invariant chains has been instrumental in defining their role in signal transduction and tyrosine phosphorylation. A role of src family phosphotyrosine kinases in T cell activation has been demonstrated and several phosphotyrosine kinase substrates have been identified and their functions characterized. Homologous recombinant techniques have led to the development of murine strains that lack CD4 or CD8 expression. These models are likely to be instrumental in studying the role of T cell subsets in autoimmune disorders, tissue transplant rejection and tumor rejection. A role of major histocompatibility complex I in the development of T cell subsets and NK cells has been defined. Recent data suggest a role of interaction between plasma membrane molecules of activated T helper cells and B cells, B cells primed with plasma membrane of activated T helper cells and cytokines, and interaction between bone marrow stromal cells and B cell progenitors and precursors, in the B cell development, proliferation, and differentiation. The structure and functions of adhesion molecules, especially with regard to signal transduction and homing events, are better defined.