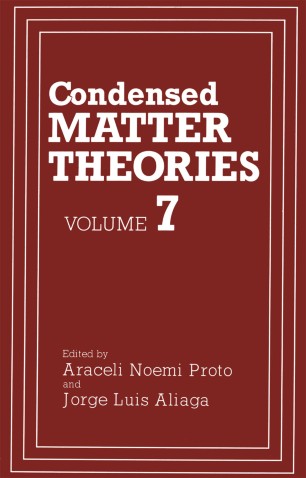 The XV International Workshop on Condensed Matter Theories was held at the beautiful seaside resort of Mar del Plata, Argentina, during the first week of July, 1991. The first meeting of this workshop took place at the Instituto de Ffsica Teorica, Sao Paulo, Brazil, in 1977, as the first Panamerican Workshop on Condensed Matter Theories. Its purpose was to bring together scientists from the Western countries, to work on many different topics related to the manifold aspects of condensed matter theories. The Workshop was so successful in facilitating exchanges of ideas and techniques pertaining to different areas of scientific endeavour that it quickly transformed itself into a broadly based, interdisciplinary forum for the informal discussion of the interrelation and mutual connections that naturally arise between the diverse disciplines encompassed under the common name condensed matter theories. From the green-house effect to neural networks, all theoretical efforts are interwined in a very complex fashion. The next five workshops were held at Trieste, Italy (1978); Buenos Aires, Argentina (1979); Caracas, Venezuela (1980); Mexico City, Mexico (1981); and St. Louis, Missouri (1982). At the last meeting, in view of the truly international dimension reached by these gatherings, it was decided to substitute the word "International" for "Panamerican", and hold the next meeting, appropriately enough, in Europe.