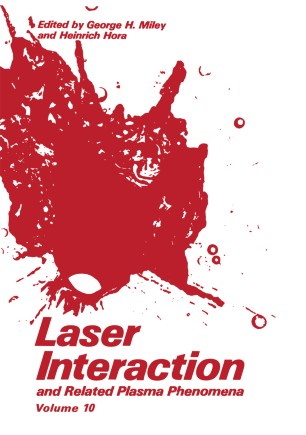 The Tenth International Workshop on "Laser Interaction and Related Plasma Phenomena" was held November 11-15, 1991, at the Naval Postgraduate School, Monterey, California. This conference joined physicists from 11 countries (Australia, Canada, China, France, Israel, Italy, Spain, Switzerland, united Kingdom, USA, and the USSR). This meeting was marked by the inauguration of the EDWARD TELLER MEDAL FOR ACHIEVEMENTS IN FUSION ENERGY. This medal served as a celebration of the tenth conference in the 22-year series and as an opportunity to honor one of the world's greatest physicists and a leading pioneer in this field: Edward Teller. Four medals were awarded in the inaugural ceremony. The first recipient of the medal was Nobel Laureate Nikolai G. Basov, who served for many years as Director of the LebedevPhysical Institute of the Academy of Sciences of the USSR. In his address to Edward Teller, Dr. Basov underlined that Dr. Teller was the first in history to produce an exothermal nuclear fusion reaction, the mechanism that may now lead to an inexhaustive, environmentally clean, and low cost energy source in the future. This goal, he stressed, becomes more crucial as the greenhouse effect may not permit burning of fossil fuels for much longer. Basov also reviewed events leading the International Quantum Electronics Conferences of 1963 where he disclosed the first publication on laser fusion and that of 1968 where he reported the first observation of fusion neutrons using a laser-irradiated target. The second recipient was John H.