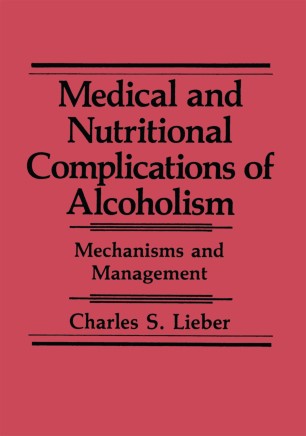 Medical and Nutritional Complications of Alcoholism

In the Western world, alcohol is the most abused drug. recognized that a majority of patients with cirrhosis do For all the attention being directed toward heroin, co­ admit to excessive alcohol consumption. Other tissues caine, and marijuana, the favorite mood-altering drug in can also be severely affected, including brain, gut, the United States, as in almost every human society, is heart, endocrine systems, bone, blood, and muscle. A question often raised is, "In what way does an alcoholic alcohol. In nature, the fermentation of sugars is the differ from a nonalcoholic?" Inquiries have focused on major source of ethanol, but how humans first encoun­ tered it is unclear. It most likely occurred in either psychological make-up, behavioral differences, and socio­ fermented fruit juices (wine), fermented grain (beer), or economic factors. More recently, however, physical dif­ fermented honey (mead). Whether the Paleolithic Stone ferences have been delineated. Prior to the development Age man knew of ethanol is undetermined, but it is of various disease entities, chronic ethanol exposure abundantly clear that his Neolithic descendants were results in profound biochemical and morphological familiar with the product of fermentation. With the changes. Consequently, an alcoholic does not respond exception of the original inhabitants of Tierra del Fuego, normally to alcohol, other drugs, or even other toxic the Australian aborigines, and some polar tribes, all agents.