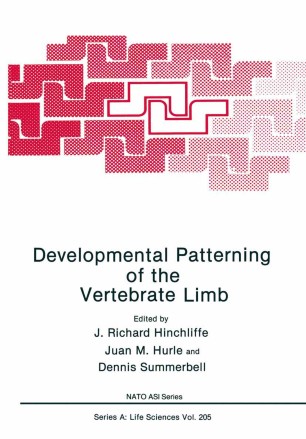 Developmental Patterning of the Vertebrate Limb

Following pioneering work by Harrison on amphibian limbs in the 1920s and by Saunders (1948) on the apical ridge in chick limbs, limb development became a classical model system for investigating such fundamental developmental issues as tissue interactions and induction, and the control of pattern formation. Earlier international conferences, at Grenoble 1972, Glasgow 1976,and Storrs, Connecticut 1982, reflected the interests and technology of their time. Grenoble was concerned with ectoderm-mesenchyme interaction, but by the time of the Glasgow meeting, the zone of polarizing activity (ZPA) and its role in control of patterning was the dominant theme. Storrs produced the first intimations that the ZPA could be mimicked by retinoic acid (RA), but the diversity of extracellular masrix ~olecules,particularly in skeletogenesis,was the main focus of attention. By 1990, the paradigms had again shifted. Originally, the planners of the ARW saw retinoic acid (as a possible morphogen controlling skeletal patterning), the variety of extracellular matrix components and their roles, and the developmental basis of limb evolution as the leading contemporary topics. However, as planning proceeded, it was clear that the new results emerging from the use of homeobox gene probes (first developed to investigate the genetic control of patterning of Drosophila embryos) to analyse the localised expression of "patterning genes" in limb buds would also be an important theme.