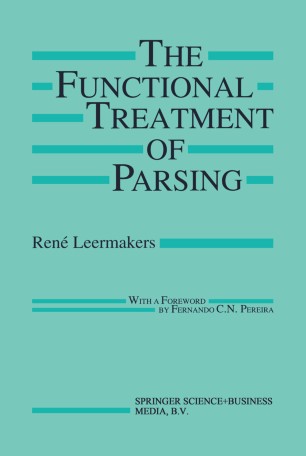 The Functional Treatment of Parsing

Part of the The Springer International Series in Engineering and Computer Science book series (SECS, volume 242)

Parsing technology traditionally consists of two branches, which correspond to the two main application areas of context-free grammars and their generalizations. Efficient deterministic parsing algorithms have been developed for parsing programming languages, and quite different algorithms are employed for analyzing natural language.
The Functional Treatment of Parsing provides a functional framework within which the different traditional techniques are restated and unified. The resulting theory provides new recursive implementations of parsers for context-free grammars. The new implementations, called recursive ascent parsers, avoid explicit manipulation of parse stacks and parse matrices, and are in many ways superior to conventional implementations. They are applicable to grammars for programming languages as well as natural languages.
The book has been written primarily for students and practitioners of parsing technology. With its emphasis on modern functional methods, however, the book will also be of benefit to scientists interested in functional programming. The Functional Treatment of Parsing is an excellent reference and can be used as a text for a course on the subject.