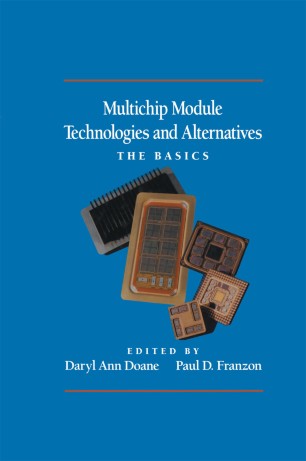 Far from being the passive containers for semiconductor devices of the past, the packages in today's high performance computers pose numerous challenges in interconnecting, powering, cooling and protecting devices. While semiconductor circuit performance measured in picoseconds continues to improve, computer performance is expected to be in nanoseconds for the rest of this century -a factor of 1000 difference between on-chip and off-chip performance which is attributable to losses associated with the package. Thus the package, which interconnects all the chips to form a particular function such as a central processor, is likely to set the limits on how far computers can evolve. Multichip packaging, which can relax these limits and also improve the reliability and cost at the systems level, is expected to be the basis of all advanced computers in the future. In addition, since this technology allows chips to be spaced more closely, in less space and with less weight, it has the added advantage of being useful in portable consumer electronics as well as in medical, aerospace, automotive and telecommunications products. The multichip technologies with which these applications can be addressed are many. They range from ceramics to polymer-metal thin films to printed wiring boards for interconnections; flip chip, TAB or wire bond for chip-to-substrate connections; and air or water cooling for the removal of heat.