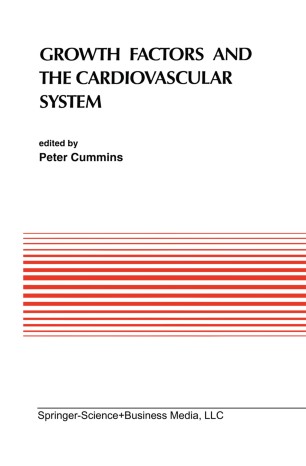 Growth Factors and the Cardiovascular System

Nature is totally amoral! There are at least 3-4 million people in France alone who suffer from arterial hypertension, and whose cardiovascular system is submitted day and night to both a haemodynamic and hormonal stress. In all cases, the vasculature hypertrophies as does the myocardium. This growth process is obviously mainly detrimental at the outset since it lowers compliance of the arteries and makes them stiffer. In contrast, myocardial hypertrophy is initially beneficial since the growth process multiplies the number of contractile units and by so doing improves external work. In addition, according to Starling's law, wall stress is lowered. Growth factors playa major role in this amoral process as a trigger for hypertrophy at the vascular level, and very likely at the level of the myocardium. Another major point of interest is the role of growth factors as determinants of restenosis after angioplasty and also of atherogenesis. Several chapters in this book are directly or indirectly concerned with this problem which is far from being purely academic since several groups are currently trying to control these processes by gene transfer. Certainly, one of the major clinical questions arising from such studies is why restenosis is not more frequent in clinical practice. After de-endotheliazation, the biologist would predict on the basis of recent studies on growth factors, and in contrast with current clinical opinion, that hypertrophy would occur in all cases with more or less complete restenosis.