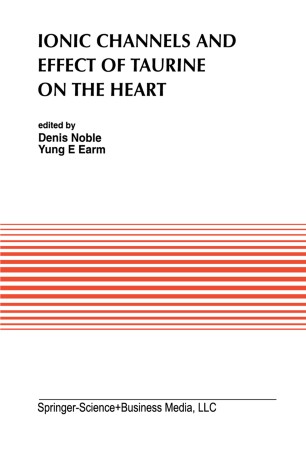 Ionic Channels and Effect of Taurine on the Heart

This book is based on papers presented at a Symposium held in Seoul, Korea in 1992. The idea for the symposium developed naturally from work in which Professor Yung E Earm, at Seoul National University, had been involved both in my laboratory in Oxford and in his own laboratory in Seoul concerning the possible role of certain amino acids, like taurine that are strongly concentrated by the cells of the heart, and the relationship between such acids and membrane ionic currents. The first obvious question was whether it is possible to identify the transport mechanisms involved for taurine and whether they are electrogenic. The second question is what function could be served by such processes: does taurine play an essential role in cardiac tissue and is this important in protecting the heart from disease? With his colleagues in the Korean Physiological Society, Professor Earm set about the task of fmancing and organizing a meeting at which some of the world's leading cardiac electrophysiologists and taurine specialists could discuss these questions. The fmance was generously provided by the Dong-A Pharmaceutical Company, one of the leading scientific companies in Korea.