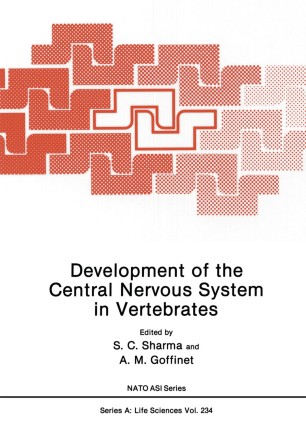 Development of the Central Nervous System in Vertebrates

~he major theme of this book is the development of the vertebrate central nervous system. ~is volume contains summaries of most of the invited participants at the NA~ advanced study institute entitled "Development of central nervous system in vertebrates" held in Maratea, Italy, from June 23-July 5, 1991. In order to address this topic, we have drawn upon a selection of current studies dealing with molecular, cellular and system analysis which specifically pertain to the general principles of the development. ~he major aim of this institute was to bring together a select group of investigators who would present their views on the current issues in their respective fields and to foster extensive discussions amongst participants in smaller groups. Such interactions brought together the exchanges of ideas amongst participants and helped clarify the intricate details and formulate new vistas and collaborations. Since the study of nervous system development has focused mostly on the origin of neuron and glia cells, the area of current research was represented by talks on early cellular events including effects of growth factors, BOX and other gene expressions and cell lineage of specific cell type(s). Formation of specific cell types and the specific neuronal connections have been a major theme in the study of the nervous system development. Recent technical advances has resulted in new information at both cellular and molecular levels which have provided new details. Current research was represented by "selective" topics discussed at the meeting.