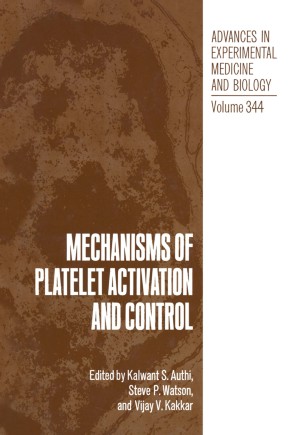 Mechanisms of Platelet Activation and Control

Part of the Advances in Experimental Medicine and Biology book series (AEMB, volume 344)

Recent years have seen tremendous advances in our understanding of the molecular mechanism of platelet activation. All aspects of signal transduction in platelets from the identification of surface receptors, G proteins, phospholipases, protein kinases and phosphatases, intracellular receptors for inositol phosphates, the Ca2+ regulatory machinery, cytoskeletal constituents to the control mechanism employing cyclic nucleotides has seen an explosion of information regarding their importance and for each constituent in the family of molecules to which they belong. This information has been of interest to researchers across a wide spectrum of disciplines including biochemists, pharmacologists, cell biologists and clinicians. In April 1992 an International Symposium bearing the name of this volume was organised at the Thrombosis Research Institute to bring together scientists from across the world whose common interest was the study of platelet activation and its regulation. We were particularly encouraged by the positive response from our speakers and the participants, their detailed contributions and the very lively discussions that took place throughout the two days of the symposium. Almost every aspect of signal transduction in human platelets was represented. Of the invited speakers twelve were from Europe (including the U. K. ), eight from North America and one from Japan. This volume is a compilation of chapters submitted by the speakers and represents a concise but informative picture of the present knowledge of the mechanisms of platelet activation and control.