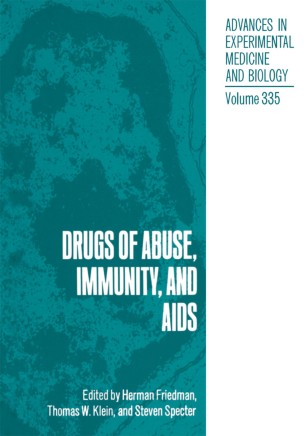 Drugs of Abuse, Immunity, and AIDS

Part of the Advances in Experimental Medicine and Biology book series (AEMB, volume 335)

This volume is based on the program of the Second International Conference on Drugs of Abuse, Immunity and AIDS, held in Clearwater Beach, FL in June 1992. The Conference was supported in part by the University of South Florida College of MediCine with financial assistance from the National Institute on Drug Abuse. The focus of this conference was the effects of drugs of abuse on immunity. It is now widely recognized that psychoactive drugs of abuse, including marijuana, cocaine, and opiates, as well as alcohol, have marked effects in an individual, including effects on their nervous system and behavior. In the past two decades, the scope of studies concerning the effects of some drugs of abuse have also involved investigations of alterations of various physiologic parameters including effects on the immune system. and the influence of such immune alterations on normal physiological responses. In this regard, participants in this Second International Conference provided newer information concerning both basic and clinical aspects of drugs of abuse and immunity, especially immunodeficiencies. In this regard, advances have been made in recent years concerning the nature and mechanisms whereby the immune system is regulated and the possible mechanisms by which drugs of abuse influence such immune systems. In particular, the emergence of psychoneuroimmunology as a new discipline the last decade has heightened interest in the immune responses influenced by psychoactive drugs. This has resulted in interdisciplinary investigations involving both clinical and basic scientists, including microbiologists, immunologists, physiologists, psychiatrists, oncologists, psychologists, etc.