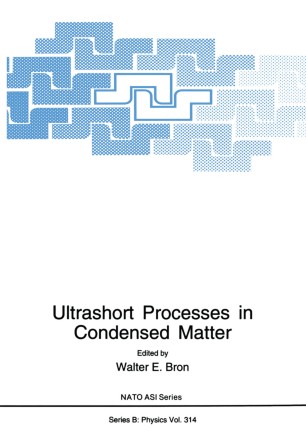 The Advanced Study Institute (AS!) considered a number offacets of the very rapidly advancing field of theoretical and experimental aspects of ultrashort processes in condensed matter. Common threads exist between a series of example cases. One major subgroup of topics involves the ultrashort dynamics of excitations of various "particles" produced through the interactions of condensed matter with ultrashort duration laser light. Examples ofthe excitations include electronic and hole carriers, electron-hole plasma, phonons, vibrons and rotons, two phonon states, and excitons. Experimentation on the dynamics of such excitations, are carried out in the bulk, at surfaces, in thin films, and in quantum wells. The dynamical steps which the excitations usually undergo include photo-excitation, local thermalization, particle-particle interaction, particle phonon interactions and eventual return to true thermal equilibrium. This ASI was organized to benefit particularly advanced graduate students, specifically, those near the end of their Ph.D. thesis projects, and also for postdoctoral scholars already active in the field. The overall organizational goal was centered around a set oftutorially based lectures intermingled with full scale discussion periods of equal time and importance as the lectures. The general discussion periods were designed to offer to the participants ample time to ask detailed questions and to make comments and contributions of their own. In order to complete the involvement of the participants a full length poster session was also held. A representative set of abstracts of these posters appear as an Appendix to the lectures.