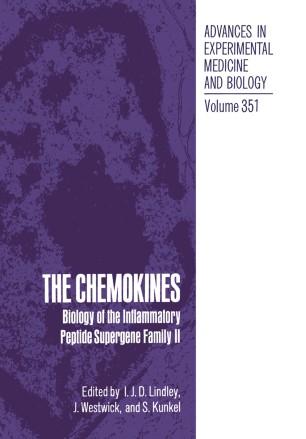 Part of the Advances in Experimental Medicine and Biology book series (AEMB, volume 351)

The first symposium in this series was held at the Royal College of Surgeons of England in December 1988 and was entitled "Novel Neutrophil Stimulating Peptides". That symposium successfully brought together the majority of laboratories working in the area of interleukin-8 and related peptides; see Immunology Today 10: 146-147 (1989). The Second International Symposium on Chemotactic Cytokines was held at the same venue in June 1990, and a much-increased attendance reflected the accelerating pace of work in the area of these chemotactic cytokines. The proceedings of that meeting were published in Advances in Experimental Medicine and Biology, vol. 305 (1991). The rapid advances made in the field of chemotactic cytokines over the last 18 months necessitated a third Symposium in this series to collate and place in perspective an explosion of new data. The Third International Symposium on Chemotactic Cytokines was held between August 31 and September 1, 1992 in Baden-bei-Wien, Austria. However, the lack of a clear nomenclature system was creating some confusion in the area, especially as new factors continue to be discovered and classified as family members. In the past, these inflammatory mediators had been placed arbitrarily under the broad heading of "intercrines" or "chemotactic cytokines" with no clear classification guidelines to follow. This nomenclature issue was addressed at the Symposium, where investigators in the field were invited to reach a consensus regarding a collective name for these mediators. The resulting decision was to identify the major family as chemokines, to replace all previous terms.