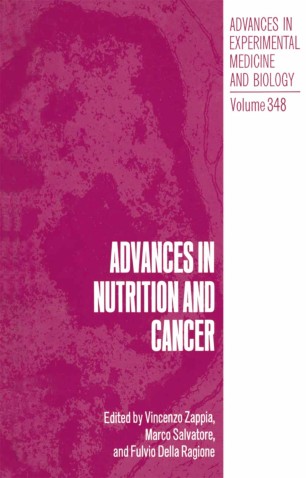 Advances in Nutrition and Cancer

Part of the Advances in Experimental Medicine and Biology book series (AEMB, volume 348)

This volume contains the scientific contributions presented at the International Symposium held in Naples, Italy, in November 1992 at the National Tumor Institute "Fondazione Pascale". The Meeting gathered together experts from different disciplines, all involved in the vital and timely subject of Nutrition and Cancer. About 15 years ago a consensus among cancer epidemiologists began to emerge suggesting that diet might be responsible for 30-60% of the cancers in the developed world. The best estimate, reported in a now classical paper by Richard Doll and Richard Peto (1981), was that by dietary modification, it would be possible to reduce fatal cancers by about 35%. Within about six years there was widespread agreement that the principal changes required were a reduction in consumption of fat, along with an increase in the consumption of fruit, green and yellow vegetables, dietary fiber, and some micronutrients. Attention was also paid to the methods of cooking and preservation of foodstuffs. On the other hand very few, if any, effects were attributed to food additives and to pollution of food by trace pesticides, to which the general public often gives unfounded importance.