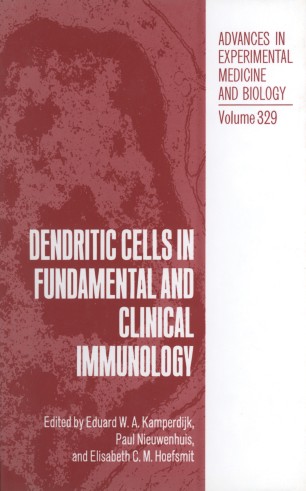 Part of the Advances in Experimental Medicine and Biology book series (AEMB, volume 329)

These Proceedings contain the contributions of the participants of the Second International Symposium on Dendritic Cells that was held from the 1st to 25th of June 1992 in Amsterdam, the Netherlands. The First International Symposium on Dendritic Cells was organized as a Satellite symposium at the occasion of the 30th anniversary of the Japanese Reticuloendothelial Society by Dr. Y. Imai in Yamagata (Japan), in 1990. It was entitled "Dendritic Cells in Lymphoid Tissues," and focused primarily on the Interdigitating Cells (IDC), Epidermal Langerhans cells (LC) and Follicular Dendritic Cells (FDC) , from the point of view of human pathology. However, the concept of Dendritic Cell System, comprising the bone marrow derived IDC and LC but not the FDC, was based on animal experiments and mainly on in vitro experiments on isolated cells. In a report from the Reticuloendothelial Society Committee on Nomenclature in 1982, Tew, Thorbecke and Steinman had already characterized these different types of DC, but the gap between in vivo and in vitro function remained. In Amsterdam, the Symposium focused on the Role of Dendritic Cells in Fundamental and Clinical Immunology. First, recent developments in molecular biology of antigen presentation and cell biological aspects of signal transduction were discussed, in relation to the potential of DC to stimulate lymphocytes and to trigger their in vitro differentiation.