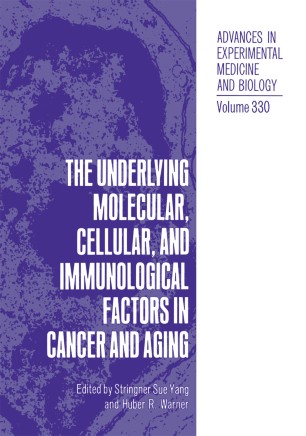 The Underlying Molecular, Cellular and Immunological Factors in Cancer and Aging

Part of the Advances in Experimental Medicine and Biology book series (AEMB, volume 330)

Background Cancer is a variety of malignancies generally associated with aging. As the overall health technology and health care delivery improved with the advances made in medicine and science in the United States, the life expectancy of the population also increased. The average life expectancy in the U. S. A. has increased from 49 years at the end of 1900 to 75 years today in 1990 (1-3). The population of 65 years and older that constituted 25. 5 million or 11. 3% of the total U. S. population in 1980(4) has now increased to 31. 1 million or 12. 5% of the population according to the 1990(5) census. As cancer diagnosis and treatment have improved, cancer mortality among patients under 55 has been significantly reduced within recent years *1; however, cancer incidence under 55 is still increasing at about 0. 4% per year (as compared to 1. 0% for all ages or 0. 6% for < 65) according to the 1990 review of the 15 year trends in the Cancer Statistics Review 1973-1987, published by the Surveillance, Epidemiology, and End Results (SEER) Program of the National Cancer Institute (NCI). In contrast, both cancer incidence and mortality have been increasing among the population 65 and over*2 at a rate of 1. 4% and 1. 0% respectively per year between 1973-1987(6).