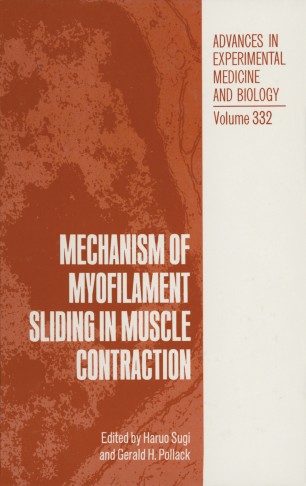 Part of the Advances in Experimental Medicine and Biology book series (AEMB, volume 332)

This volume presents the entire proceedings of the symposium organized by one of us (H. S. ) on November 11 to 15, 1991 at Hakone, Japan, under the title of "Mechanism of Myofllament Sliding in Muscle Contraction. " Among various kinds of energy transduction mechanisms in biological systems, the mechanism of muscle contraction has been studied most intensively and extensively over many years. Since the monumental discovery by the two Huxleys and coworkers that muscle contraction results from relative sliding between the thick and thin myofilaments, attention of muscle investigators has been focused on the question, what makes the fllaments slide past one another. In response to the above question, A. F. Huxley and Simmons put forward a contraction model in 1971, in which globular heads of myosin (cross-bridges) extending from the thick fllament first attach to actin on the thin fllament, and then change their angle of attachment to actin (power stroke) leading to force generation or myofilament sliding until they detach from the thin fllament. The rocking cross-bridge contraction model seemed to be entirely consistent with the kinetic scheme of actomyosin ATPase published by Lymn and Taylor at the same time, thus giving a strong impression to the people concerned that the muscle contraction mechanism would soon be sorted out. In his review lecture in 1974, however, A. F.