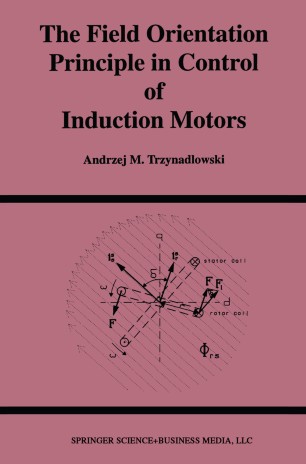 The Field Orientation Principle in Control of Induction Motors

The Field Orientation Principle was fIrst formulated by Haase, in 1968, and Blaschke, in 1970. At that time, their ideas seemed impractical because of the insufficient means of implementation. However, in the early eighties, technological advances in static power converters and microprocessor-based control systems made the high-performance a. c. drive systems fully feasible. Since then, hundreds of papers dealing with various aspects of the Field Orientation Principle have appeared every year in the technical literature, and numerous commercial high-performance a. c. drives based on this principle have been developed. The term "vector control" is often used with regard to these systems. Today, it seems certain that almost all d. c. industrial drives will be ousted in the foreseeable future, to be, in major part, superseded by a. c. drive systems with vector controlled induction motors. This transition has already been taking place in industries of developed countries. Vector controlled a. c. drives have been proven capable of even better dynamic performance than d. c. drive systems, because of higher allowable speeds and shorter time constants of a. c. motors. It should be mentioned that the Field Orientation Principle can be used in control not only of induction (asynchronous) motors, but of all kinds of synchronous motors as well. Vector controlled drive systems with the so­ called brushless d. c. motors have found many applications in high­ performance drive systems, such as machine tools and industrial robots.