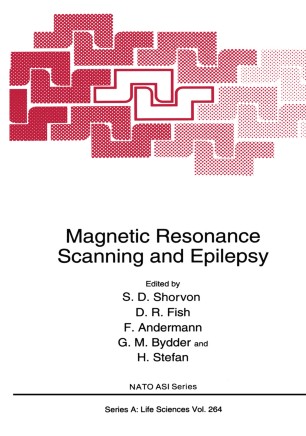 It was only in 1980 that the first recognisable magnetic resonance images of the human brain were published, by Moore and Holland from Nottingham University in England. There then followed a number of clinical trials of brain imaging, the most notable from the Hammersmith Hospital in London using a system designed by EMI, the original manufacturers of the first CT machines. A true revolution in medicine has ensued; in only a few years there are thousands of scanning units, and magnetic resonance imaging (MRI) has assumed a central importance in medical investigation. It is an extraordinary fact that within a few years of development, the esoteric physics of nuclear spin, angular momentum, and magnetic vector precession were harnessed to provide exquisite images of living anatomy; modem science has no greater tribute. That indisputable king of neurology and the oldest of recorded conditions, epilepsy, has not been untouched by the new technology; indeed, it is our view that the introduction of MRI of electroencephalography (EEG) in the late has been as important to epilepsy as was that 1930s. Now, for the first time, the structural and aetiological basis of the condition is susceptible to thorough investigation, and MRI can provide structural detail to parallel the functional detail of EEG. MRI has the same potential as had EEG over 50 years ago, to provide a new level of understanding of the basic mechanisms, the clinical features and the treatment of epilepsy.