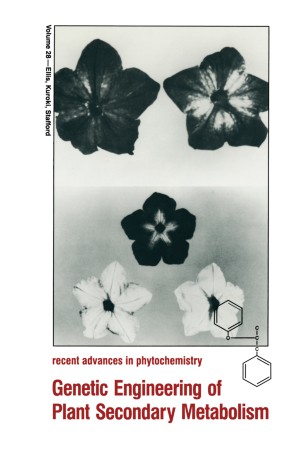 In this volume of Recent Advances in Phytochmistry you will find a record of the pioneering attempts of plant biochemists and molecular biologists to modify the patterns of secondary metabolism in plants, as presented at the 33rd annual meeting of the Phytochemical Society of North America, in Asilomar, California, on June 27 -July I, 1993. The studies described here represent a marriage of the newest of technologies with one of the oldest human activities, exploitation of plant chemistry. They also represent the beginning of a new era of phytochemical research, an era that will undoubtedly begin to provide answers to some of the long-standing questions that have absorbed plant biochemists for the past century. There is, for instance, a common deflating experience to which every worker in the area of plant secondary metabolism can probably relate. After hearing about the latest research findings regarding some aspect of remarkable compound "X", someone in the audience finally directs the inevitable question at the hapless speaker. "Tell me, is anything known as to the biological role of compound "X" in the plant?" The answer, in most cases, must be "essentially nothing"! This is a frustrating scenario for both the speaker and the audience, since the very fact that a complex biosynthetic pathway remains encoded in a plant genome points to an associated selective advantage. The problem is that establishing the nature and scale of that advantage is a very complex task.