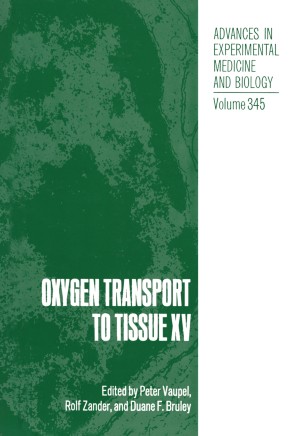 Part of the Advances in Experimental Medicine and Biology book series (AEMB, volume 345)

Seventeen years after the 2nd International Symposium on Oxygen Transport to Tissue, which was held in Mainz in March 1975, the local Organizing Committee and the Board of ISOTT were pleased to host the ISOTT Conference in Mainz on the Rhine again. The venue of the 20th meeting was the prestigious, fully restored Schloss Waldthausen (Waldthausen Castle) which provided a special setting for ISOTT 1992. The beautiful front view of the castle became part of the ISOTT 1992 logo. The 20th ISOTT Meeting was held in Mainz from August 26th through August 30th, 1992. The Conference attracted 200 active participants from 16 countries. The theme of this meeting emphasized oxygen transport to tumors but as in earlier meetings, essentially all aspects of oxygen transport within the body were covered as demonstrated by the manuscripts comprising this volume of the series "Oxygen Transport to Tissue". All manuscripts were reviewed. Extensive revisions were made in about 25% and modest revision in about another 30%. Because we had to compromise between the aim of rapid publication on the one hand and the need for thorough review on the other, minor errors in format and some typographical errors were not corrected. Except for some revisions, all of the original camera-ready manuscripts in this volume were prepared by the authors themselves and we greatly appreciate their cooperation.