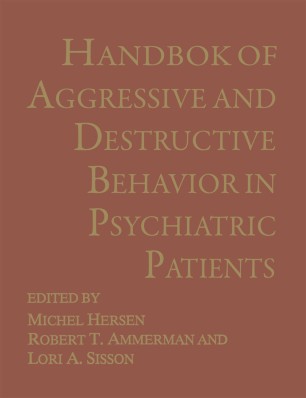 Handbook of Aggressive and Destructive Behavior in Psychiatric Patients

Scarcely a day passes without the media detailing some form of human aggression, whether it be on its grandest scale in the form of war, random bombings and shootings in the streets, torture in a prison camp, murder by gangs, wife abuse resulting in the murder of the husband, or the physical abuse of children, sometimes resulting in their death. Frequently perpetrators of human aggression, when arrested and tried in court, resort to a psychiatric defense. But are all such aggressors indeed appropriately psychiatric patients? And if so, what are their particular diagnoses and how do these relate to aggression? Also of concern is aggression directed against self, as evidenced in the rising incidence of suicide among young people or the self-mutilation of patients suffering from certain personality disorders. Both violence directed outward and aggression toward oneself pose considerable challenges to clinical management, whether in the therapist's office or in the inpatient unit. Although we have not been able to find successful deterrents to aggression, a sizeable body of evidence does exist, certainly of a descriptive nature. Such data for psychiatric patients are scattered, however, and can be found in literatures as diverse as the biological, ethological, epidemiological, legal, philosophical, psychological, psychiatric, and crimi­ nological. Therefore, given the increased frequency with which mental health professionals encounter cases of violence in their day-to-day work, we believed it important that existing data be adduced in one comprehensive volume.