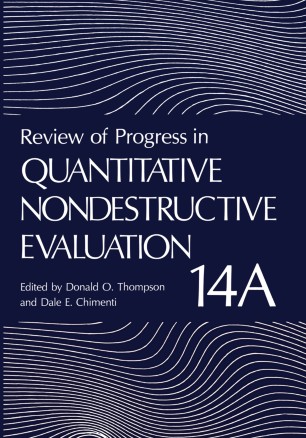 These Proceedings, consisting of Parts A and B, contain the edited versions of most of the papers presented at the annual Review of Progress in Quantitative Nondestructive Evaluation held at Snowmass Village, Colorado, on July 31 to August 4, 1994. The Review was organized by the Center for NDE at Iowa State University, in cooperation with the Ames Laboratory of the US DOE, the Materials Directorate of the Wright Laboratory, Wright-Patterson Air Force Base, the American Society of Nondestructive Testing, the Department of Energy, the National Institute of Standards and Technology, the Federal Aviation Administration, the National Science Foundation Industry/University Cooperative Research Centers, and the Working Group in Quantitative NDE. This year's Review of Progress in QNDE was attended by approximately 450 participants from the U.S. and many foreign countries who presented over 360 papers. The meeting was divided into 36 sessions, with as many as four sessions running concurrently. The Review covered all phases of NDE research and development from fundamental investigations to engineering applications or inspection systems, and it included many important methods of inspection science from acoustics to x-rays. In the last eight to ten years, the Review has stabilized at about its current size, which most participants seem to agree is large enough to permit a full-scale overview of the latest developments, but still small enough to retain the collegial atmosphere which has marked the Review since its inception.