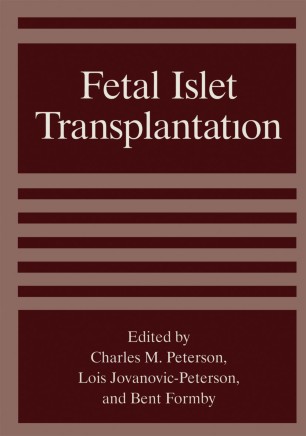 Despite the advent of insulin for clinical use in 1922, our ability to control hypergly­ cemia and prevent the long term sequelae ofthe disease remains limited. Thus normalization of the milieu interieur with physiologic responses of insulin and metabolites remains an elusive but critically important goal. The developing endocrine pancreas provides a model system that speaks to many challenges of the transplantation biologist. Thus the attempt to of vascularization, growth and development, immunologic toler­ recapitulate the ontogeny ance, and glucose responsive insulin secretory capacity of fetal islet tissue provides a tantalizing possibility to replace insulin secreting tissue in persons with diabetes. Studies of this tissue are also important because of the implications such investigations have for genetic and molecular biological approaches to restoring insulin secretion as well as for providing clues to enhancing the growth and repair of islets that have been the target of autoimmune disease. Investigators in the area offetal islet transplantation comprise a small group scattered throughout the world scientific community. Therefore it seemed important to provide a forum where these scientists could gather, share ideas, and achieve consensus such that progress in this rapidly evolving area could be facilitated. The conference would have remained a dream if the support of the Okla Basil Meade, Jr. family had not made it manifest.