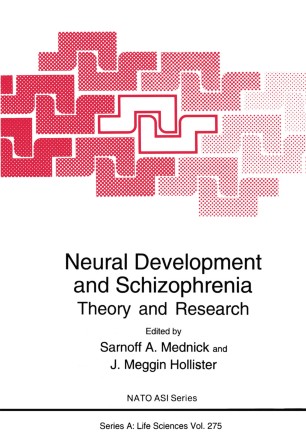 This is the third meeting we have organized which has explored the meaning of fetal neural developmental disruption in the etiology of schiwphrenia. The first was sponsored by the Schiwphrenia Research Branch with the scientific cooperation of Dr. David Shore. We met in Washington; the output of the meeting was published in a book entitled, Fetal Neural Development and Adult Schizophrenia. Cambridge University Press. 1991. The next meeting was an Advanced Research Workshop sponsored by NATO and was held at n Ciocco. Castelvecchio Pascoli. This meeting was reported in a NATO volume. Developmental Neuropathology of Schizophrenia and was edited by Mednick. Cannon. Barr and La Fosse. The current meeting has noted several advances in the field. There are additional psychiatric illnesses which have been found to be related to maternal viral infection in the second trimester. There have been studies reported which have definitely observed a viral infection in the mothers of fetuses who later evidenced schirophrenia. More evidence has been published which has replicated the "second-trimester effect." In the future studies will be wise to provide serological evidence of a viral infection and information on the precise viruses involved. Another important step will be to determine whether second-trimester maternal viral infection is related to a behavioral deficit in the infant. If neural development has been compromised. it might be possible to detect deficits in the infant with the proper measures. We look forward to future meetings at which these new areas might be explored.