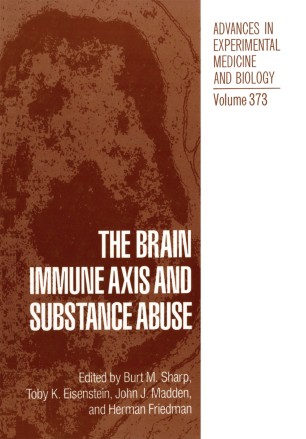 Part of the Advances in Experimental Medicine and Biology book series (AEMB, volume 373)

This volume represents the proceedings of the 2nd annual symposium on the Brain Immune Axis and Substance Abuse held at the Breakers Hotel in Palm Beach, FL in June 1994. The history of productive studies concerning the relationship between the nervous and the immune systems is relatively recent. Studies on the effects of drugs of abuse on the immune system and on infections among individuals who abuse drugs are also of recent vintage. Only in the last decade have investigators begun to describe the role of drugs of abuse and their endogenous counterparts on the brain-immune axis. Thus, the involvement of the neuroendocrine system in the interactions of drugs of abuse and the immune system has only recently been appreciated. In addition, it has been recognized that direct neural inputs impact immune function. Given the complexity of these interactions, characterization of biologically significant phenomena and elucidation of their mechanisms of action often requires a multidisciplinary approach. This meeting, on which the chapters in this book are based, brought together scientists from an array of biomedical disciplines whose work is focused on the effects of drugs of abuse on the neuro-endocrine immune axis. The meeting was unique in focusing on the brain-immune axis from the viewpoint of drugs of abuse rather than either immunity itself or the brain itself. Presentations addressed the direct effects of drugs of abuse on various components of the immune system, as well as those mediated indirectly by the central nervous system and the neuroendocrine system.