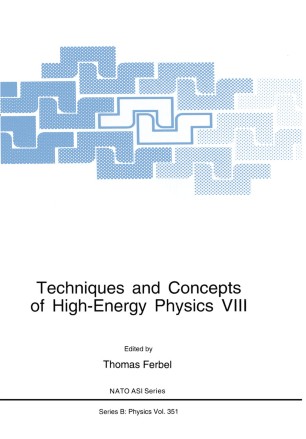 For the eighth Advanced Study Institute (ASI) on Techniques and Concepts of High-Energy Physics we returned once again to the Hotel on the Cay on that speck of land in the harbor of Christiansted, St. Croix, U. S. Virgin Islands. This time, the ASI brought together a total of 73 participants, from 21 countries. The primary support for the meeting was provided, as usual, by the Scientific Affairs Division of the North Atlantic Treaty Organization (NATO). The ASI was cosponsored by the U. S. Department of Energy, by the Fermi National Accelerator Laboratory (Fermilab), by the U. S. National Science Foundation, and by the University of Rochester. A special contribution from the Oliver S. and Jennie R. Donaldson Charitable Trust provided an important degree of flexibility, as well as support for worthy students from developing countries. In addition, the International Science Foundation contributed very generously to the support of a participant from Russia. As in the case of the previous ASls, the scientific program was designed for advanced graduate students and recent PhD recipients in experimental particle physics. The present volume of lectures, although, unfortunately, short of three contributions, should complement the material published in the first seven ASIs, and prove to be of value to a wider audience of physicists. It is a pleasure to acknowledge the encouragement and support that I have continued to receive from colleagues and friends in organizing this meeting.