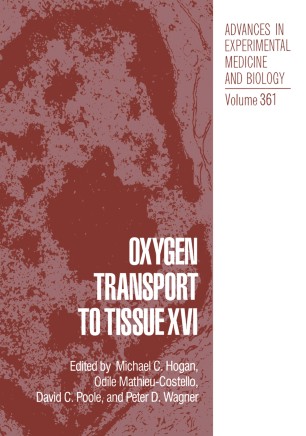 Part of the Advances in Experimental Medicine and Biology book series (AEMB, volume 361)

Since its inception in 1973, The International Society on Oxygen Transport to Tissue (ISOTT) has provided a unique forum to facilitate and encourage scientific interaction and debate. Welcoming scientists and clinicians from a broad spectrum of disciplines, each with their own particular skills and expertise, ISOTT unites them under the common theme of oxygen transport. The successful blend of scientific presentations and informal discussion which characterizes ISOTT is epitomized best by the many fundamental discoveries and technical advancements which it has spawned. The breadth and strengths of The Society's scientific base promotes the rapid progression of ideas from theoretical concepts to rigorous scientific testing and often, ultimately to the clinical arena. Each publication of the ISOTT proceedings has been recognized by Science Citation Index listing and the papers frequently establish scientific precedents and become considered as standard works in their respective fields. The 21st ISOTT Meeting was held in San Diego from August 14th through August 18th, 1993. The San Diego Meeting attracted about 150 registrants and 40 accompanying persons. Ten state-of-the-art lectures were presented by international experts in ~ transport and there were in addition two symposia -one dealing with assessment of tissue hypoxia and the other with functional heterogeneity in different organ systems. There were 100 free communications, consisting of posters accompanied by an abbreviated oral summary. All manuscripts were reviewed by the Editors for form and content, but as is customary for the ISOTT proceedings, rigorous scientific peer review was not undertaken.