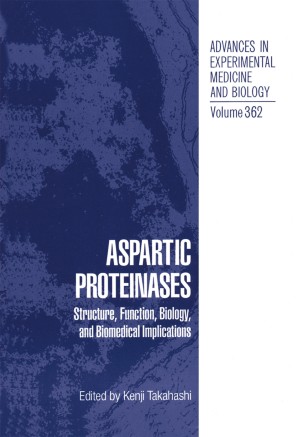 Part of the Advances in Experimental Medicine and Biology book series (AEMB, volume 362)

The 5th International Conference on Aspartic Proteinases was held on September 19 through 24, 1993, at Naito Museum of Pharmaceutical Science and Industry, Kawashima­ cho, Gifu Prefecture, Japan, about 15 miles northwest of Nagoya City. About 100 scientists attended the conference, including 52 from 14 countries outside Japan, and 32 papers were presented by invited speakers, and 58 papers as posters. The purpose of this conference was to present and discuss new information on the structure, function, and biology, and related topics, including biomedical implications, of aspartic proteinases, and this book is a collec­ tion of nearly all the papers presented at the meeting. Aspartic proteinases belong to one of the four major classes of proteinases, the others being serine, cysteine, and metalloproteinases, and are so called since they have two catalytic aspartic acid residues in common in their active sites. Most of them are optimally active at acidic pH, hence the long-used name "acid proteinases," which, indeed, was the major title of the first conference of this series. However, some of them are active at around neutral pH, indicating their physiological roles in a wider range of pH than hitherto considered.