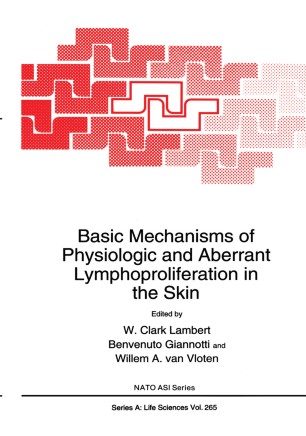 Basic Mechanisms of Physiologic and Aberrant Lymphoproliferation in the Skin

This book is based upon a series of papers originally presented at a NATO Advanced Studies Workshop of the same title held at the study Center HI Cappuccini," a converted monastery in San Miniato, a small village located between Pisa and Florence, Italy, in October 1991. Authors were asked to submit their completed chapters by the following February; these were then scanned onto computer disks, edited and returned to the authors for final revision, and updating, with a final deadline of February 1993. The authors were encouraged to make whatever modifications they wanted, especially regarding updating their chapters, with an eye to making the final product both comprehensive and current. In this we succeeded beyond our expectations, with most chapters extensively altered and many completely re-written and significantly expanded. Thus, although the original meeting was held in 1991, the chapters in this volume may be regarded as current from at least February, 1993, with some of the final updated revisions received as late as July, 1993. This book, as agreed in our original contract, has been delivered to the publisher "camera-ready. " This means that all of the scanning, editing, proofing and typesetting were done here, by the office of the Department of Dermatology at the New Jersey Medical School. We essentially produced the book, which the publisher, for the most part, then photocopied. This has been an enormous burden, borne mainly by my colleague in this division, Robert A.