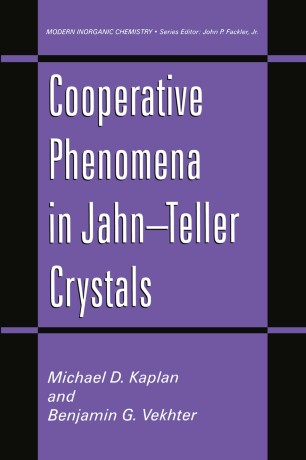 This book by Kaplan and Vekhter brings together the molecular world of the chemist with the condensed matter world of the physicist. Prior to the collapse of the Soviet Union, chemists in the West devoted lit­ to relationships between molecular electronic structure and tle attention solid-state vibronic phenomena. Treating quantum mechanical problems wherein the adiabatic Born-Oppenheimer approximation fails was done by "brute force. " With bigger and better computers available in the West, molecular orbital calculations were done on observed and conceived static structures with little concern for any cooperativity of vibrational behavior that might connect these states. While it had long been understood in the West that situations do occur in which different static structures are found for molecules that have identical or nearly identical electronic structures, little attention had been paid to understanding the vibrational states that could connect such structures. It was easier to calculate the electronic structure observed with several possible distortions than to focus on ways to couple electronic and vibrational behavior. In the former Soviet Union, computational power was not as acces­ sible as in the West. Much greater attention, therefore, was devoted to conserving computational time by considering fundamental ways to han­ dle the vibrational connectivity between degenerate or nearly degenerate electronic states.