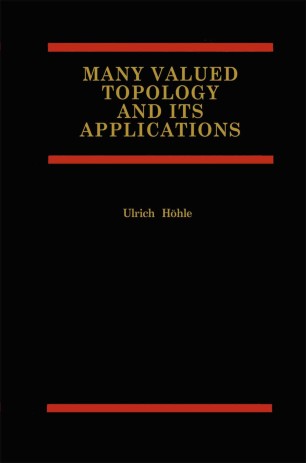 Many Valued Topology and its Applications

The 20th Century brought the rise of General Topology. It arose from the effort to establish a solid base for Analysis and it is intimately related to the success of set theory. Many Valued Topology and Its Applications seeks to extend the field by taking the monadic axioms of general topology seriously and continuing the theory of topological spaces as topological space objects within an almost completely ordered monad in a given base category C. The richness of this theory is shown by the fundamental fact that the category of topological space objects in a complete and cocomplete (epi, extremal mono)-category C is topological over C in the sense of J. Adamek, H. Herrlich, and G.E. Strecker. Moreover, a careful, categorical study of the most important topological notions and concepts is given - e.g., density, closedness of extremal subobjects, Hausdorff's separation axiom, regularity, and compactness. An interpretation of these structures, not only by the ordinary filter monad, but also by many valued filter monads, underlines the richness of the explained theory and gives rise to new concrete concepts of topological spaces - so-called many valued topological spaces. Hence, many valued topological spaces play a significant role in various fields of mathematics - e.g., in the theory of locales, convergence spaces, stochastic processes, and smooth Borel probability measures.
In its first part, the book develops the necessary categorical basis for general topology. In the second part, the previously given categorical concepts are applied to monadic settings determined by many valued filter monads. The third part comprises various applications of many valued topologies to probability theory and statistics as well as to non-classical model theory. These applications illustrate the significance of many valued topology for further research work in these important fields.