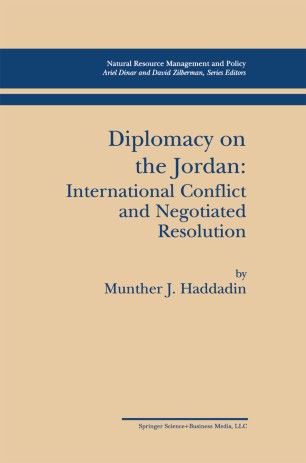 Diplomacy on the Jordan

The Jordan River has attracted the attention of people around the world. The natives call it "the Shari'a," or the Code [of God.] The religious importance of the river is known to mankind. Travelers and explorers sailed down its course from north to south. All have noted that its waters are turbulent, its path windy, and its meandering course steep. Old civilizations flourished in the Jordan River basin. The territories surrounding it were known to have been ruled by the same political authority for centuries. Riparian States came to exist in its basin only after the First World War, when Britain and France shared the spoils of the eclipsed Ottoman Empire. Lebanon, Syria, Jordan and Palestine were created as separate political entities and became riparian parties on the Jordan. Palestine became the target of the Zionist Movement for the establishment of a national home for the Jews. They were supported by Britain, who issued the Balfour Declaration in 1917 pledging support for their objective. The Jewish State, Israel, was established in part of Palestine in 1948, and became another riparian party on the Jordan River.