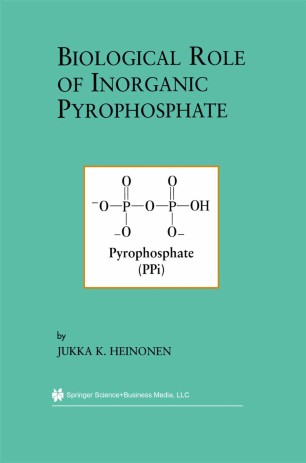 Dr. Heinonen reviews and critically evaluates the scientific literature on the biological role of inorganic pyrophosphate (PPi ) published from 1940 to the end of 1999. He describes and classifies all known biochemical reactions that produce Ppi; describes and evaluates all published methods used in biological Ppi; and compiles and critically evaluates information on the concentration of PPi (with the conclusion that, contrary to common belief, PPi exists throughout the living world in rather high concentrations). Many reactions in which PPi is used as a biochemical energy source instead of ATP have been described in recent decades, especially in bacteria, protists, and plants. These reactions are evaluated from the bioenergetic and regulatory points of view. Also considered is the possible role of PPi as a source of biochemical energy in the primitive phases of life, before ATP. Data is presented on the regulatory role of PPi in living systems, such as activities of enzymes, fidelity of syntheses of macromolecules, and proliferation of cells. PPi may also regulate the formation and dissolution of bone as well as pathologic calcification of soft tissues and the formation of urinary stones. The formation of calcium pyrophosphate dihydrate crystals in the extracellular fluids of joints cause the disease called pseudogout.
Biological Role of Inorganic Pyrophosphate book is a unique and invaluable source of references (about 1120) and summarized data for professionals who study or plan to study the role of PPi in living systems. Many different branches of science (biochemistry, microbiology, bioenergetics, plant physiology, parasitology, evolution, orthopedics, rheumatology) have involvement with PPi. This book sums up available knowledge in one place and will help scientists cross disciplinary boundaries.