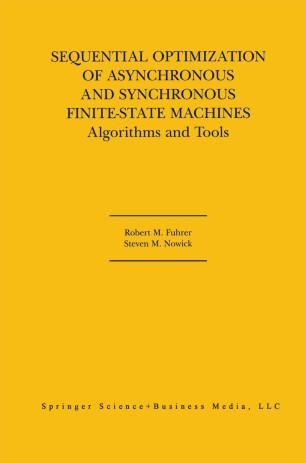 Asynchronous, or unclocked, digital systems have several potential advantages over their synchronous counterparts. In particular, they address a number of challenging problems faced by the designers of large-scale synchronous digital systems: power consumption, worst-case timing constraints, and engineering and design reuse issues associated with the use of a fixed-rate global clock. Moreover, while for synchronous systems these problems are exacerbated by increasing system size, asynchronous systems promise to scale more gracefully.
Sequential Optimization of Asynchronous and Synchronous Finite-State Machines: Algorithms and Tools makes three contributions to the field of sequential optimization for finite-state machines: 1) it introduces several new provably-optimal algorithms for the synthesis and optimization of asynchronous finite-state machines (FSMs); 2) it presents practical software implementations of each of these algorithms; and 3) it introduces a complete new CAD package, called MINIMALIST, binding these tools into a state-of-the-art technology-independent synthesis path for `burst-mode' asynchronous circuits. Throughout this book, real-world industrial designs are used as benchmark circuits to validate the usefulness of the tools. As an additional benefit, some of the theory and tools also provide new methods for the optimization of synchronous FSMs.