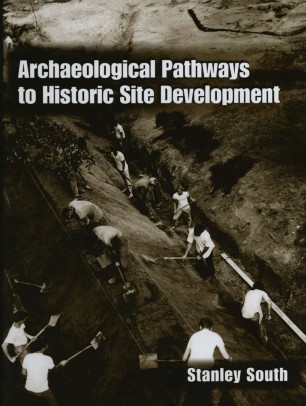 In this book I walk with the reader along the bothered me that some of my colleagues, in their archaeological pathways traveled by many reports of archaeological activity on documented researchers in the process of historic site historic sites, never mention finding evidence of previous American Indian occupation. Sites development. The sponsors, historians, archaeologists, and administrators who have selected by Europeans, usually on high ground bordering the deep water channel of navigatable traveled those pathways may find familiar much of what I say here. The pathways exploring the past streams, are those also once preferred by Native Americans for the access to environmental involve research in documents and the archaeological record, using the best methods of resources they afford. How could Native both, in an attempt to understand the material American material culture not be present on such culture remains left behind, not only by explorers sites? and colonists from Europe and Africa, but also by I once asked a well-known archaeological Native Americans who lived in the environment for colleague why it was that such evidence did not appear in his reports from such sites, and the reply millenia before those strangers appeared on the scene. In explaining the archaeological record of was, "Gh, I find all kinds of Indian things on the American Indians I lean on not only archaeological historic sites I dig, but that's not why I'm there.

From the reviews:
"[...] a major authority on method and theory in historical archaeology and an expert on the American Southeast, considers arhcaeological conservation, theory building, and historic site interpretation and restoration focusing on 1670-80 Charles Towne, South Carolina, and the Native American legacy that preceded European colonization. His well-documented compendium explicates "the process of historic site development for the education and entertainment of the visiting public", presenting a salient example of historic cultural resource management."
(Choice, 40:2, October 2002)
"The book is site reporting at its best. It is extremely well illustrated with numerous field excavation photographs, artifact plates, historical maps, and South's archaerological site plans, which rank among the most artistic and informative produced. This is an excellent site report and well worth the wait."
(Journal of Anthropological Research, 59, 2003)
Buy options