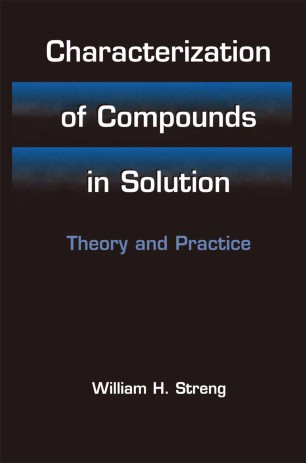 Characterization of Compounds in Solution

Scientists from many disciplines require making observations which are dependent upon the behavior of compounds in solution. This ranges from areas in geography, such as oceanography, to areas in chemistry, such as chromatography, to areas in biology, such as pharmacology. Historically, information would be obtained by observing a response for a given set of conditions and then the conditions would be changed and a new response obtained. In this approach there would be little effort made to actually understand how a compound was behaving in solution but rather just the response was noted. Understanding the behavior of compounds in solution is critical to understanding their behavior in biological systems. This has become increasingly important during the last twenty years as an understanding of the biochemistry related to human illness has become better understood. The development of the pharmaceutical industry and the need to rapidly screen large numbers of compounds has made scientists in the area of drug development aware that the pharmacological activity of compounds can be predicted by knowing their solution physical chemical properties. This is not to say that a specific drug-active site interaction can be predicted but rather a prediction can be made whether or not a compound will be absorbed, transported, or distributed within a physiological system in such a way that an interaction can occur.

`One of the basic principles of physical chemistry concerns the characterization of compounds. Indeed, physical chemists make good collaborators with synthetic organic chemists in that the physikers know how to study the new compounds that the organikers continually synthesize. [...] In his short introductory chapter, the author discusses why one would want to characterize compounds, at what point during development should the compounds be characterized, and what methodologies constitute charcterization investigations. In the next two concise and tidy chapters, the authors outlines a number of basic concepts associated with themordynamics and kinetics. [...] So who should buy this book? There is no doubt that the volume constitutes an excellent source of information for graduate students because its broad focus cuts across so many fields that it can serve as a supplement to various courses. The empirical aspects will be useful to pharamceutical workers who need a shortcut to a viable experimental protocol and who do not have the time to research the literature.'
Pharmaceutical Development and Technology, 8:3 (2003)
Buy options