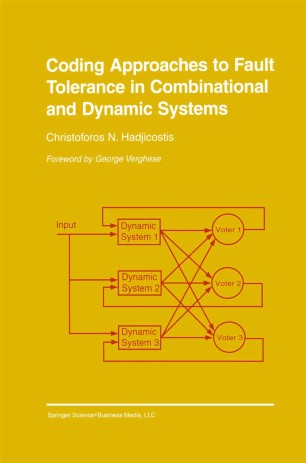 Coding Approaches to Fault Tolerance in Combinational and Dynamic Systems

Part of the The Springer International Series in Engineering and Computer Science book series (SECS, volume 660)

Coding Approaches to Fault Tolerance in Combinational and Dynamic Systems describes coding approaches for designing fault-tolerant systems, i.e., systems that exhibit structured redundancy that enables them to distinguish between correct and incorrect results or between valid and invalid states. Since redundancy is expensive and counter-intuitive to the traditional notion of system design, the book focuses on resource-efficient methodologies that avoid excessive use of redundancy by exploiting the algorithmic/dynamic structure of a particular combinational or dynamic system.
The first part of Coding Approaches to Fault Tolerance in Combinational and Dynamic Systems focuses on fault-tolerant combinational systems providing a review of von Neumann's classical work on Probabilistic Logics (including some more recent work on noisy gates) and describing the use of arithmetic coding and algorithm-based fault-tolerant schemes in algebraic settings. The second part of the book focuses on fault tolerance in dynamic systems. Coding Approaches to Fault Tolerance in Combinational and Dynamic Systems also discusses how, in a dynamic system setting, one can relax the traditional assumption that the error-correcting mechanism is fault-free by using distributed error correcting mechanisms. The final chapter presents a methodology for fault diagnosis in discrete event systems that are described by Petri net models; coding techniques are used to quickly detect and identify failures.
From the Foreword: "Hadjicostis has significantly expanded the setting to processes occurring in more general algebraic and dynamic systems... The book responds to the growing need to handle faults in complex digital chips and complex networked systems, and to consider the effects of faults at the design stage rather than afterwards."
George Verghese, Massachusetts Institute of Technology
Coding Approaches to Fault Tolerance in Combinational and Dynamic Systems will be of interest to both researchers and practitioners in the area of fault tolerance, systems design and control.