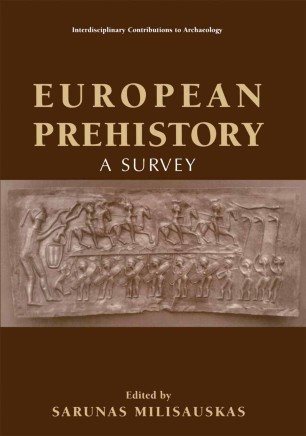 Sarunas Milisauskas· 1.1 INTRODUCTION The purpose of this book is four-fold: to introduce English-speaking students and scholars to some of the outstanding archaeological research that has been done in Europe in recent years; to integrate this research into an anthropological frame of reference; to address episodes of culture change such as the transition to farming; the origin of complex societies, and the origin of urbanism, and to provide an overview of European prehistory from the earliest appearance of humans to the rise of the Roman empire. In 1978, the Academic Press published my book European Prehistory which, typically for that period, emphasized cultural evolution, culture process, technology, environment, and economy. To produce a new version and an up- to-date prehistory of Europe, I have invited contributions from specialists in the Palaeolithic, Mesolithic, Bronze and Iron Ages. Thus while this version of European Prehistory is a new book, however, it still incorporates some data from the 1978 version, particularly in The Present Environment and Neolithic chapters. Like its predecessor, this edition is structured around selected general topics, such as technology, trade, settlement, warfare, and ritual.

From the reviews:
"The synthesis of such a large body of evidence is impressive, and the book is an interesting and informative read both for those new to archaeology and for established academics."
(The Holocene, 13:5, 2003)
"The volume is a resounding success in terms of providing a coherent and up to date narrative. This wide coverage can also be seen in the selection of featured sites, which ranges across most of Europe. It does not shy away from covering the major debates or making a judgment upon them."
(Nick Thorpe, Antiquity)