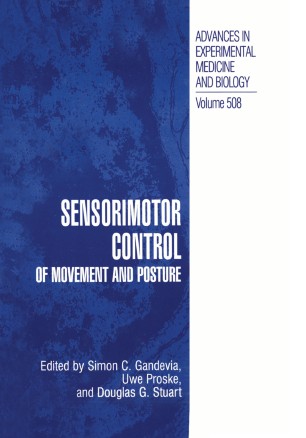 Sensorimotor Control of Movement and Posture

Part of the Advances in Experimental Medicine and Biology book series (AEMB, volume 508)

This collection of contributions on the subject of the neural mechanisms of sensorimotor control resulted from a conference held in Cairns, Australia, September 3-6, 2001. While the three of us were attending the International Union of Physiological Sciences (IUPS) Congress in St Petersburg, Russia, in 1997, we discussed the implications of the next Congress being awarded to New Zealand. We agreed to organise a satellite to this congress in an area of mutual interest -the neuroscience of movement and sensation. Australia has a long-standing and enviable reputation in the field of neural mechanisms of sensorimotor control. Arguably this reached its peak with the award of a Nobel Prize to Sir John Eccles in 1963 for his work on synaptic transmission in the central nervous system. Since that time, the subject of neuroscience has progressed considerably. One advance is the exploitation of knowledge acquired from animal experiments to studies on conscious human subjects. In this development, Australians have achieved international prominence, particularly in the areas of kinaesthesia and movement control. This bias is evident in the choice of subject matter for the conference and, subsequently, this book. It was also decided to assign a whole section to muscle mechanics, a subject that is often left out altogether from conferences on motor control. Cairns is a lovely city and September is a good time to visit it.