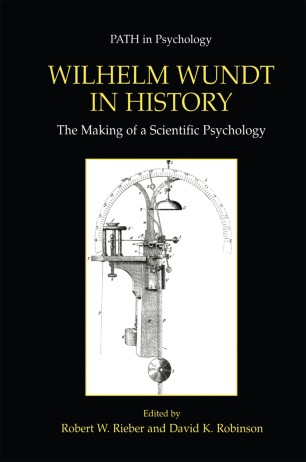 The Making of a Scientific Psychology

In this new millenium it may be fair to ask, "Why look at Wundt?" Over the years, many authors have taken fairly detailed looks at the work and accomplishments of Wilhelm Wundt (1832-1920). This was especially true of the years around 1979, the centennial of the Leipzig Institute for Experimental Psychology, the birthplace of the "graduate program" in psychology. More than twenty years have passed since then, and in the intervening time those centennial studies have attracted the attention and have motivated the efforts of a variety of historians, philosophers, psychologists, and other social scientists. They have profited from the questions raised earlier about theoretical, methodological, sociological, and even political aspects affecting the organized study of mind and behavior; they have also proposed some new directions for research in the history of the behavioral and social sciences. With the advantage of the historiographic perspective that twenty years can bring, this volume will consider this much-heralded "founding father of psychology" once again. Some of the authors are veterans of the centennial who contributed to a very useful volume, edited by Robert W. Rieber, Wilhelm Wundt and the Making of a Scientific Psychology (New York: Plenum Press, 1980). Others are scholars who have joined Wundt studies since then, and have used that book, among others, as a guide to further work. The first chapter, "Wundt before Leipzig," is essentially unchanged from the 1980 volume.

`In all, then, this is an interesting collection, with sufficient new material to justify its acquisition by libraries and scholars, even those that possess the earlier book.'
Journal of the History of Behavioral Sciences, 39:3 (2003)
Buy options