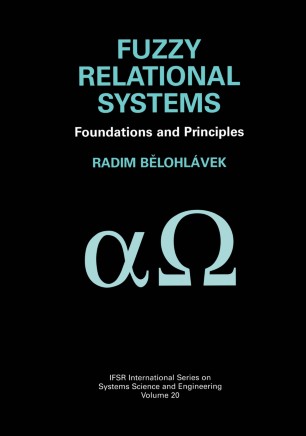 Since their inception, fuzzy sets and fuzzy logic became popular. The reason is that the very idea of fuzzy sets and fuzzy logic attacks an old tradition in science, namely bivalent (black-or-white, all-or-none) judg­ ment and reasoning and the thus resulting approach to formation of scientific theories and models of reality. The idea of fuzzy logic, briefly speaking, is just the opposite of this tradition: instead of full truth and falsity, our judgment and reasoning also involve intermediate truth values. Application of this idea to various fields has become known under the term fuzzy approach (or graded truth approach). Both prac­ tice (many successful engineering applications) and theory (interesting nontrivial contributions and broad interest of mathematicians, logicians, and engineers) have proven the usefulness of fuzzy approach. One of the most successful areas of fuzzy methods is the application of fuzzy relational modeling. Fuzzy relations represent formal means for modeling of rather nontrivial phenomena (reasoning, decision, control, knowledge extraction, systems analysis and design, etc. ) in the pres­ ence of a particular kind of indeterminacy called vagueness. Models and methods based on fuzzy relations are often described by logical formulas (or by natural language statements that can be translated into logical formulas). Therefore, in order to approach these models and methods in an appropriate formal way, it is desirable to have a general theory of fuzzy relational systems with basic connections to (formal) language which enables us to describe relationships in these systems.