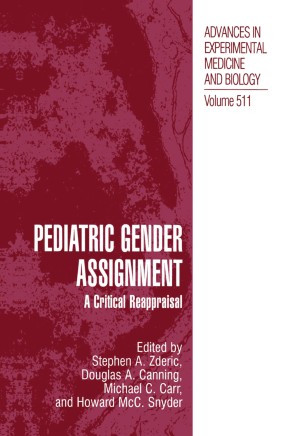 Part of the Advances in Experimental Medicine and Biology book series (AEMB, volume 511)

This book represents the proceedings from a conference that took place in Dallas in the spring of 1999 which was entitled "Pediatric Gender Assignment - A Critical Reappraisal". Some participants rightfully argued that the conference really focused on the issue of pediatric gender assignment, and that reassignment was not applied in most cases. Their comments were reflected in the title of this monograph. This multidisciplinary meeting was sponsored by a conference grant from the National Institutes of Health, and a broad inquiry into this complex topic took place from many points of view. Basic scientists offered insight into mechanisms of sexual differentiation of the gonads, physical phenotype and imprinting of the central nervous system. Endocrinologists reviewed their experience in diagnosis and management, surgeons described traditional as well as innovative approaches, and there was strong representation from the ethical and behavioral sciences. In putting together such a panel, it was essential that we identify a cast of speakers who could address their viewpoints with strong convictions, and yet not let their passions render the meeting counter productive. We were not disappointed. While many differing points of view were firmly expressed by the panelists and audience, all viewpoints were accorded the respect they deserved. The concept behind the meeting and this book really originated in 1997 shortly after Diamond and Sigmundson published their long term follow up study of the John/Joan case.