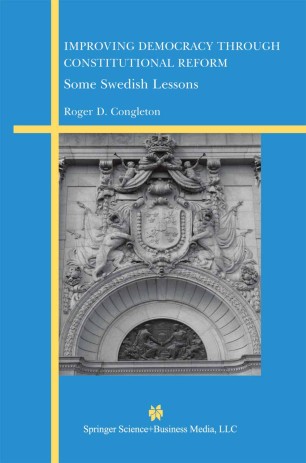 Do constitutions matter? Are constitutions simply symbols of the political times at which they were adopted, or do they systematically affect the course of public policy? Are the policy crises of failing democracies the result of bad luck or of fundamental problems associated with the major and minor constitutional reforms adopted during their recent histories?

The purpose of the present study is to address these questions using a blend of theory, history, and statistical analysis. The Swedish experience provides a nearly perfect laboratory in which to study the effects of constitutional reform. During the past 200 years, Swedish governance has shifted from a king-dominated system with an unelected four-chamber parliament to a bicameral legislature elected with wealth-weighted voting in 1866, and then to a new electoral system based on proportional representation and universal suffrage in 1920, and finally to a unicameral parliamentary system in 1970. All these radical reorganizations of Swedish governance were accomplished peacefully using formal amendment procedures established by previous constitutions.

By focusing on constitutional issues rather than Sweden's political history, this book extends our understanding of constitutional reform and parliamentary democracy in general.

"Most writing in constitutional political economy is theoretical and normative - it describes what constitutions should look like and how they should work, not how they do look and work. In tracing the constitutional history of Sweden, Roger Congleton breaks with this tradition. Sweden constitutes one of democracy's great success stories of the last century, and thus it is important that students of constitutional political economy know what role its constitutions have played in bringing about this success. This book describes how Sweden's constitutions have evolved, and puts this evolutionary process into perspective using analytic insights from public choice. It is a most welcomed addition to the literature."
(Dennis C. Mueller, Dept. of Economics, University of Vienna)
"Professor Congleton has brought his considerable knowledge of political economy to bear on new questions. His carefully constructed analysis of the Swedish setting shows why "constitutions matter" and how reforms can allow a well-functioning democracy to improve and better serve its citizens. The results is a balanced and complete discussion that will be of interest to all of those interested in how our choice of institutions affects the workings of our democratic systems."
(Birgitta Swedenborg, Center for Business and Policy Studies, Stockholm, Sweden)