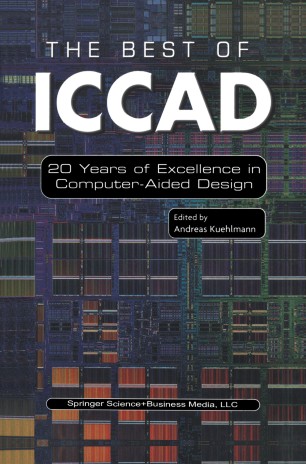 The Best of ICCAD

20 Years of Excellence in Computer-Aided Design

In 2002, the International Conference on Computer Aided Design (ICCAD) celebrates its 20th anniversary. This book commemorates contributions made by ICCAD to the broad field of design automation during that time. The foundation of ICCAD in 1982 coincided with the growth of Large Scale Integration. The sharply increased functionality of board-level circuits led to a major demand for more powerful Electronic Design Automation (EDA) tools. At the same time, LSI grew quickly and advanced circuit integration became widely avail­ able. This, in turn, required new tools, using sophisticated modeling, analysis and optimization algorithms in order to manage the evermore complex design processes. Not surprisingly, during the same period, a number of start-up com­ panies began to commercialize EDA solutions, complementing various existing in-house efforts. The overall increased interest in Design Automation (DA) re­ quired a new forum for the emerging community of EDA professionals; one which would be focused on the publication of high-quality research results and provide a structure for the exchange of ideas on a broad scale. Many of the original ICCAD volunteers were also members of CANDE (Computer-Aided Network Design), a workshop of the IEEE Circuits and Sys­ tem Society. In fact, it was at a CANDE workshop that Bill McCalla suggested the creation of a conference for the EDA professional. (Bill later developed the name).