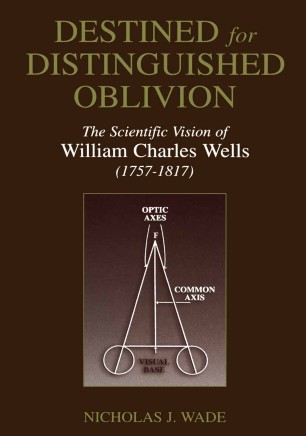 My fIrst encounter with the name of William Charles Wells, over twenty years ago, was an oblique reference to his Essay upon single vision that Wheatstone (1838) made in a classical article on binocular vision. The reference was enigmatic because it stated that few had paid attention to Wells' theory of visual direction, while doing little to infonn the reader of its novelty. I was fortunate in having the excellent facility of the Rare Books and Manuscripts Department of the Library at the University of St. Andrews near at hand, so that I could cousult a copy of Wells' monograph. However, I was not aware of the full import of its contents until Hiroshi Ono visited Dundee from York University, Ontario, in 1980. Hiroshi had previously fonnalised the principles of binocular visual direction that Hering (1879) had proposed. He returned one day from St. Andrews, having read Wells' Essay upon single vision, amazed to have found that Wells had perfonned similar experiments and reached similar conclusions to Hering. Hiroshi Ono has done much to bring Wells' work on binocular single vision to the notice of visual scientists, although its reception has not been without opposition. As I read more of Wells' work on vision I became aware of its breadth as well as its depth. In addition to his essay on binocular single vision, he wrote about and conducted experiments on accommodation, visual acuity, visual persistence, and vertigo.

"Wade's extensive knowledge [...] allows him to do a skillful job relating Well's contributions to earlier and later developments[...] The volume will interest serious scholars of visual perception and those interested in the history of this science[...] Highly recommended."
(Choice, 41:4 (December 2003)
Buy options