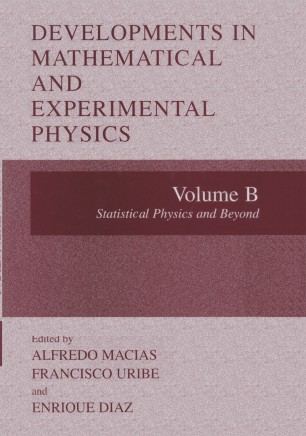 Developments in Mathematical and Experimental Physics

Volume B: Statistical Physics and Beyond

The FIRST MEXICAN MEETING ON MATHEMATICAL AND EXPERI­ MENTAL PHYSICS was held at EL COLEGIO NACIONAL in Mexico City, Mexico, from September 10 to 14, 2001. This event consisted of the LEOPOLDO GARciA-COLIN SCHERER Medal Lecture, delivered by Prof. Nicholas G. van Kampen, a series of plenary talks by Leopoldo Garcia­ CoHn, GUnter Nimtz, Luis F. Rodriguez, Ruoon Barrera, and Donald Saari, and of three parallel symposia, namely, Cosmology and Gravita­ tion, Statistical Physics and Beyond, and Hydrodynamics and Dynam­ ical Systems. The response from the Physics community was enthusi­ astic, with over 200 participants and around 80 speakers, from all over the world: USA, Canada, Mexico, Germany, France, Holland, United Kingdom, Switzerland, Spain, and Hungary. The main aim of the conference is to provide a scenario to Mexican researchers on the topics of Mathematical and Experimental Physics in order to keep them in contact with work going on in other parts of the world and at the same time to motivate and support the young and mid­ career researchers from our country. To achieve this goal, we decided to invite as lecturers the most distinguished experts in the subjects of the conference and to give the opportunity to young scientist to communi­ cate the results of their work. The plan is to celebrate this international endeavor every three years.