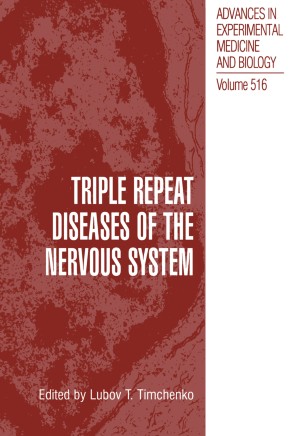 Part of the Advances in Experimental Medicine and Biology book series (AEMB, volume 516)

World of Unstable Mutations The book "Triplet Repeat Diseases of the Nervous System" overviews the lat­ est data on several disorders associated with unstable mutations. This field of re­ search is progressing extremely fast. The number of polymorphic mutations and diseases caused by these mutations is increasing almost every month. There is a strong interest to molecular bases of triplet repeat disorders. This is explained by growing necessity to develop molecular approaches for cure of these diseases. There­ fore, the authors of this book describe unstable mutations with the emphasis on molecular pathology. Broad discussion is presented on how polymorphic expan­ sions cause cell dysfunction. o The first chapter of the book focuses on the molecular pathological pro­ cesses that originate "unstable" mutations. The authors review several avail­ able models by which normal "stable" region of DNA become pathogenic and discuss possible mechanisms causing DNA instability. o The other chapters of the book describe inherited diseases associated with different types of unstable mutations. Based on the location of mutation in the disease gene, polymorphic expansions of the nervous system can be divided into two major groups. First group includes disorders with unstable expansions within the open reading frame of the gene such as Spinocer­ ebellar Ataxias caused by polyglutamine expansions. The second group in­ cludes diseases caused by expansions situated within the untranslated re­ gions of the gene.