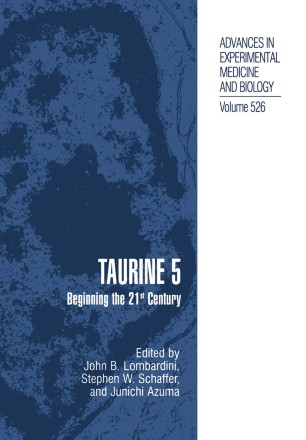 Part of the Advances in Experimental Medicine and Biology book series (AEMB, volume 526)

The Taurine Symposium- "Taurine: Beginning the 21'' Century"- was held September 20-23, 2002, on the beautiful island of Kauai in Hawaii. The headquarters of the meeting was the Radisson Kauai Beach Resort. This international meeting was attending by approximately 80 individuals from 23 nations and 4 continents. Seventy-five papers were presented either as platform presentations or poster presentations. Taurine, first isolated from ox bile in 1827 by Tiedemann and Gmelin and named in 1838 by Demarcay, became of significant scientific interest in 1968 when the first extensive review article was published by Jacobsen and Smith. Interest in taurine grew exponentially after 1975 when the first taurine symposium was organized by Ryan Huxtable in Tucson, Arizona. Since that date, taurine symposia have been held approximately every two years held in various cities and resort areas around the world. Taurine investigators have had the privilege of attending these scientific meetings on three continents - Asia, Europe, and North America. Since the initial meeting in 1975, a central question addressed during many of the symposia has been: "What is physiological, pharmacological, nutritional, and pathological role of taurine?". Although taurine has been established as an important osmolyte, it appears to affect many other biological processes. However, the exact mechanism(s) by "which taurine acts" has not yet been definitively answered. In Kauai, the patticipants discussed many topics and asked many questions regarding the role and actions of taurine.